There’s nothing in this world quite like Sole Sisters.

Although we are super proud of our accomplishments, they wouldn’t be possible without the amazing women that we call Sole Sisters. Each year, thousands of women run in solidarity; as a community, as friends, as strangers, as Sole Sisters. Our events have become a tradition – a time for women to celebrate with friends, run for someone who can’t, achieve a goal, and take time to recognize how truly wonderful they are.

Listed as one of Canadian Running Magazine’s Bucket List Races, Sole Sisters takes place in Dartmouth, Nova Scotia, and welcomes runners and walkers from all over Canada, the U.S. – and even the Cayman Islands and Australia! We’re joined by women of all ages, shapes, sizes and abilities, in fact – one year over 24 race participants were 70 years of age and older. Our events are truly unique, and fun… they are so much fun! We have music, chocolate, hug stations, tutus and more! 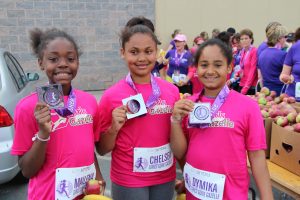 Sole Sisters Women’s Race Series is invested in our local community, we’re the financial driver for Girls Gone Gazelle Run Club (“GGG”) which is a confidence club for girls 9-13 years old. Before the pandemic GGG had three separate training groups annually (spring, summer and fall) that trained girls for a 5K running race at the end of their training period in Dartmouth.  However, in 2020 we added a virtual Cape Breton chapter and in 2021 we added the Leader, Saskatchewan chapter.  In the spring of 2022 we have over 100 gazelles training in-person in Dartmouth, Cape Breton and Leader!   In addition to the running practices there are weekly guest speakers that discuss their non-traditional careers with the Gazelles.  Before society has a chance to tell the girls what they can and can’t do, we tell them they can do anything if they prepare for it and work hard.  Even if the girls don’t stick with running we know that their confidence is boosted by the program and the exposure to female captains, pilots, architects, scientists, doctors and more.

Sole Sisters Women’s Race Series is the reason Girls Gone Gazelle Run Club has expanded and remained free to participants.  And while Sole Sisters Women’s 5K began as a way to fund Girls Gone Gazelle Run Club it has done a very similar job of empowering its 25,058 previous participants which represent every age group from pre-teen to octogenarian.  Sole Sisters have also learned that they too can be fit, active, healthy and confident regardless of when they start exercising.

Who is behind Sole Sisters Women’s Race?

Stacy Chesnutt is an east coast runner, coach and the race director of the well-known Sole Sisters Women’s Race Weekend.

“Coach Stacy” has been racing for over 30 years and has completed 8 Ironman Triathlons (including the Kona World Championships), 85 marathons (with a 2:59:05 PB) and several 50 and 100-mile trail races. She races as often as possible and tries to find a race whenever she travels. As a result, she has raced in London, Ireland, Prague, Bermuda, Spain, Portugal, Italy, Indonesia, Geece and throughout North America. Originally born in Nashville, Tennessee, Chesnutt spent much of her adult life in New York City and moved to Nova Scotia in 2006 with her husband Tim (doesn’t he look great in purple!). With dual citizenship, Chesnutt proudly considers herself an AmeriCanadian and has made the East Coast her home.

As a runner, Stacy understands the importance of a healthy lifestyle, and fully believes that fun is an essential component of that. Stacy designed the Sole Sisters Women’s Race to appeal to women of all fitness levels, encouraging both walkers and runners to focus on Finish Lines, not Finish Times.

Make sure this account has posts available on instagram.com.