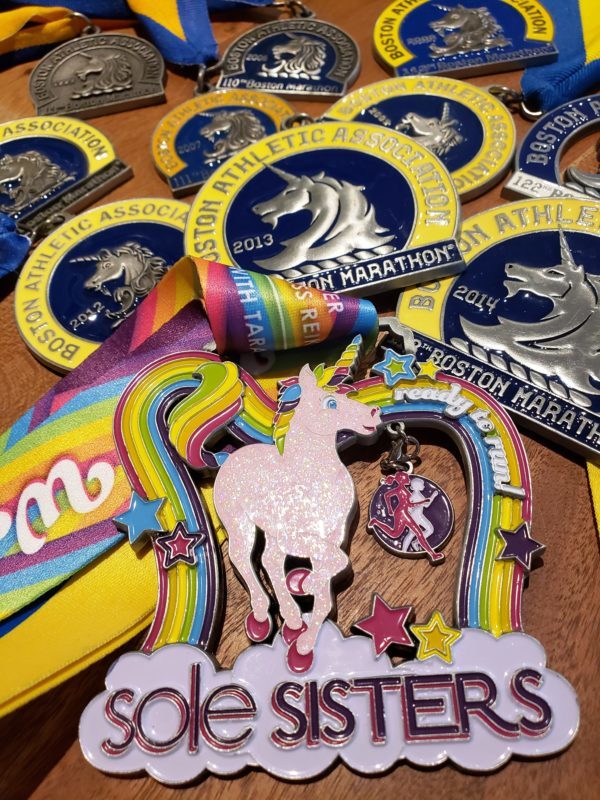 Do you love the new Sole Sisters 2020 Finishers Medal? If so, blame Sheila!

So my friend and recent race/training partner Sheila has unwittingly earned one of my favorite hashtags: #blamesheila.  I bet you’ve seen her at the races as she is frequent pace bunny!

Now you are likely wondering, what does blame Sheila mean? To me it’s just a joke but with every jest there contains and element of truth. So I’ll take the blame Sheila phrase all the way back to her training for the Boston Marathon 2017 (her first time going to the big dance*).

As Sheila began her winter training for Boston, I was a veteran of nine Boston Marathons but didn’t plan to go back until 2021.  I first ran Boston in 1999 as a 28 year old and by the time I was 40 and running my best times I wanted to go sub 3 at Boston. I’ll jump ahead to say that after getting frustratingly close I never did run my best times in Boston (instead my 2:59:05 came at a flat and fast course!).

I did improve over the years at Boston from 3:13; 3:11; 3:07 and finally 3:05! And while it wasn’t sub 3, I felt satisfied with my performance and knew I was done with the Boston Marathon for that decade at least. Then the Boston bombings happened and I knew I had to do Boston one more time. To finish my competitive Boston Marathon career in 2014 at Boston Strong felt right. I knew I’d like to go back and be fast at fifty but that was a ways off and I’d enjoy my time away from Boston.  Or so I thought. Only two years later, Sheila started her training.  And this is the blame Sheila part.

I don’t think I ever properly celebrated the fact that I was healthy enough, lucky enough and fast enough to even be at the Boston Marathon.  Sheila had a gratitude that made me excited for her, for everyone going and for my past self.  And she made me forget all the Boston Marathon challenges. Specifically weather. You train in the winter but almost always get unseasonably warm weather.  I’ve been there for every bad weather year since ’99. Specifically I am thinking of the Nor’easter of 2007 when the race was almost cancelled and the incredible heat of 2012 when Boston allowed runners to defer to 2013 (something they have never done since).

Sheila’s social media posts were joyous. This woman was excited and as her marathon training went on, her enthusiasm for all things marathon and Boston related was beyond infectious. I watched as she went to Boston and had for me a perfect weather day!  I even gave her this sign to wish her luck and in some ways, thank her for getting me excited about her journey to Boston. And to blame Sheila for why I knew I’d be at the Boston Marathon the following year!  As luck would have it, Sheila didn’t do the Boston Marathon in 2018. That should have been the first premonition of bad things to come. 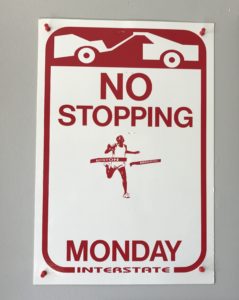 In my 10th Boston Marathon I can say unequivocally it was the worst. I have never been so cold for so long. I started the race cold and wet (in my waterproof jacket, not water resistant but truly waterproof) and things only got worse from there. If you’ve read anything about that year you know that many elites dropped out due to hypothermia and I know I was a victim of it too. I had to ask strangers to open my fueling gels during the race as my hands had long since stopped working. I always knew I’d finish the marathon but I asked myself “why am I doing this” several times. All the joy of the marathon experience was gone for me. I really hated that race and my choice to go back there before 2021 just felt stupid. Why didn’t I stop when I said I would? I was going to have 10 finishes and finish at 50 in 2021! Blame Sheila.

It’s very tempting to me to be able to have done the Boston Marathon in four decades of life (20s, 30s, 40s & 50s).   Arrogantly it never occurred to me that I wouldn’t have a BQ for 2021.  But, I joined Sheila in the Capes 50K this summer. I had no interest in doing another trail ultra after doing my first 100 miler in 2016. But I had lunch with Sheila who mentioned her doing the Capes 50K and before I knew it last summer I was signed up, blame Sheila.

As it turned out Sheila and I have both been injured this year and have been together for a few events and I am really grateful to have had her company. We walked those events and absolutely had fun because we had someone to participate with. If you are walkers then you know how many races can make you feel like you don’t belong unless you are running. Sole Sisters has always strived to celebrate the walker just as much as a runner and I can now say that Nova Scotia trail races do too.

It was while walking our 50K in August that Sheila got in my head again. That dang Sheila in just a few words had me forgoing my plan to go to Boston in 2021 to instead go back with her in 2020. I could still participate in the Boston Marathon over four decades only instead of my age being what counted it would be years so I’d have gone in the years for the ‘90s, ‘00s, teens, and 20s.  Pretty cool right? But wait, I had just chucked my plan to do Boston at 50 years young for 49 years old? Didn’t I know better? 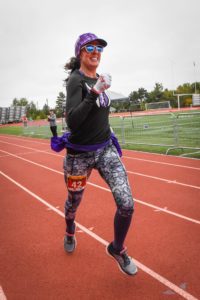 Last October I ran 3 marathons, 3 weekends in a row and in the first marathon at the Valley Harvest Marathon I qualified for the Boston Marathon under the new 5 minutes tougher time. But even I knew that BQ wouldn’t guarantee I got into Boston as the time needed to gain entry had gotten even faster than the qualifying standard (+/- 5 minutes). I didn’t care at the time as I didn’t need a BQ. But, if I was going to do Boston with Sheila I did need one. Maybe I would squeak by with my 11 seconds to spare. It didn’t seem likely but I thought I’d try.

And guess what? I didn’t have the time to get in after all. I needed to be 1:39 faster than my qualifying time.   In many ways it was humbling for me to not get into the 2020 Boston Marathon. But, I can honestly say that aside from being jealous that other friends will get to join Sheila for her training I am not sad to miss the actual race.  And thanks to Sheila I have a goal. To not only participate in the 2021 Boston Marathon but to celebrate getting a BQ (if and when I do)! I’ll also celebrate when Sheila does too.

Not being able to join Sheila at the Boston Marathon in 2020 gave me a new perspective; a humbling one at that. I’ve always had a BQ from whichever marathon I’ve done. But times have changed. I am older. I am slower. I am often injured.  So, I can now personally commiserate with everyone chasing a BQ. And I can authentically be joyous for you not just academically.

But what does the Boston Marathon and Sole Sisters Women’s Race have in common? It all comes down to the Finisher Medal!  We may not all chase the coveted BQ. But, we all can chase a goal. Maybe yours is to walk or run your first 5K. Maybe it’s to do your first race with your mother or daughter? Maybe it’s to simply lace up for another race in 2020.  I don’t know your dreams or your goals. But, I do know that you can blame Sheila for the inspiration for this year’s Sole Sisters medal!  Even if we don’t all get a BQ in 2020, we all get a unicorn!

*Any inaccuracies in this post are because I didn’t check with Sheila beforehand!  She’ll read this when everyone else does.  I hope she is flattered (and she better get to registering for Sole Sisters so she gets both unicorns in 2020).

Sole Sisters has a BIG ANNOUNCEMENT